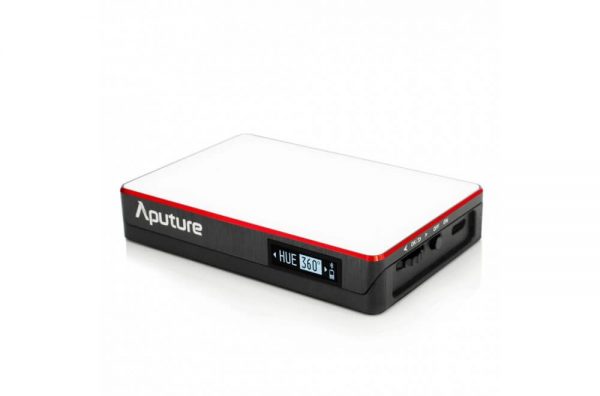 The small MC or Multicolor LED light is the first RGB fixture to be released from Aputure. It was first introduced at NAB 2019 alongside Aputure’s new Sidus Link app. The two combined opens up a lot of control for not only the MC but for all Aputure fixtures going forward. The MC packs a little jab for such a small light and has a few interesting features that I can see will come in handy for specific applications.

One thing worth mentioning is Aputure has put a lot of work into Sidus Link and Mesh technology. The tech is fully integrated into the small MC LED and I think this is a good example of what we are going to see in the future with RGB and lighting control from Aputure.

The Aputure MC is about the size of a credit card and comes in at only 130g. It has a much lighter build than the previous two small LED lights that Aputure has released. The Amaran AL-MX Bicolor is all metal and bright bi-color light. The Amaran AL-MW Mini LED is dustproof and waterproof down to 33′. The MC brings a whole different set of features including RGB.

When Apture first showed us the MC they had several in a travel case that also doubled as a wireless charger. Something to note on charging is that wireless takes approximately 1.5 hours longer to fully charge compared to using USB-C 5V/2A connection. The fastest way to charge is by using USB-PD (Power Delivery) quick charging protocol that charges a fully depleted MC in approximately 90 minutes.

You will get up to 2 hours of use at max brightness and up to 15 hours at minimum brightness.

In between the two magnets is where the MC can be charged wirelessly. Just as long as the area is covered the MC charges. I like this feature and it will be even better when the case with a charging pad is available.

A set of magnets on the back are for mounting the MC to a metal base. This can be handy if one is available where you need a little light. I found it holds fairly well to a C-stand section or other hard metal surfaces.

An improved position for the menu is on top. It is an OLED display and works well in fairly bright locations. The menu is navigated on the right side with a control wheel that has a push in function to select and change the different functions.

Holding down the control wheel allows you to navigate the settings.

Once you are in a feature tap the button again to navigate the settings.

The control wheel reacts to the speed you turn it so if you want to get to full power quickly spinning the wheel fast gets you to full power very fast. The MC output goes from 0-100.

I found the menu easy to navigate without using the Sidus Link App and that is a good thing since some fixtures can be overly complicated to access features.

The light has full Hue, Saturation, & Intensity (HSI) color control with 360° of hue and 100 levels of saturation adjustment. In HSI mode I was getting approximately 80-100 LUX from 1-meter depending on the color’s deep tone. For example, yellow is brighter than deep red.

At 3200K the MC scored very well with an extended CRI of 97.4. The kelvin tested solid with only a 28k difference.

The MC tungsten setting at 3200k is more accurate than it was at daylight kelvin settings. I was a little surprised at 6500 the MC was off by 569k however I doubt the discrepancy would result in issues when used in the real world.

The effects mode can be accessed with the Sidus Link app as well as on the MC’s onboard controls.

With Sidus Link you have a ton of options. You can control one light or group them together to all work as one.

When using the MC with other lights that might not match you can make adjustments by adding CTB (Color Correct Blue) or CTO (Color Correct Orange) depending on the mode you are in. For a light this small that’s pretty impressive.

The MC when paired with the Sides Link app gives you easy to use color control. Yes you can make changes directly on the fixture but using the app is so much better. If the light is tucked away and you want to see different options the Sides link app comes in very handy.

When the MC was still in the development stages Aputure showed us a hardware color picker that you aim at the desired color and it sends the information to the light.

Now the Sidus Link App has the Colo Picker feature so no extra hardware is needed. It is very simple to use. You choose a color with the camera on the smartphone and fill the target area with the color you want the MC to display and tap Pick Up. The color is fully editable as well. In the app, you can change the Intensity, Hue, and Saturation of the color as well as the values.

The Sidus Mesh technology is built into the MC. The proprietary Sidus Mesh system allows each light to communicate with each other and with the mobile app simultaneously. Each additional light increases the integrity of the network. This enables you to control lights within a 400-meter range, without the need for an external router just as long as there are lights at most 80 meters between each other.

What do I think?

The MC is Aputure’s most advanced product to date. While that sounds kind of funny since it’s a $90 LED light it does pack in a lot of tech and that is a first for Aputure. They aren’t known for this. They are more so for making affordable punchy LED lighting solutions. This little light is a big jump for Aputure. In future RGB fixtures like the panel they showed us at NAB 2018 it to will surely have the Sidus Link and mesh features.

As a stand-alone single MC light, the use is fairly limited to darker environments where a little color or highlight is needed from a short distance away. When using a single MC in HSI RGBWW mode the LUX drops to approximately half of the output at 80-100 LUX. If your key is putting out 300 LUX the little MC won’t be as effective, however, if the environment is moody and somewhat dark it could work.

In the sample above I shot at a shutter speed of 1/50 at f5 and an ISO of 400. For lighting, the key is a Speckular kit inside a softbox set at low output and the Aputure lantern with 300d II set to 8%. The MC is placed approximately 1-foot from the subject.

With a four or twelve fixture kit you have a lot of options to use them as practicals peppered all over a scene. With the Sidus Link App and mesh feature, you can easily control up to 100 MC lights in a stable environment or treat them as one bank. It’s up to your creativity on how best to use the MC LED light.

The 4-Light Travel Kit will come in 2 parts, a hardshell wireless charging case with 4 lights, 2 Diffusers, and 2 Ball Heads, and a carrying pouch for the power supply and accessories will be approximately $500.

The 12-Light Production Kit also comes in a hardshell wireless charging case with 3 USB ports, 12 MC lights, 4 Diffusers, and 6 Ball Heads. The accessories will be stored in a drawer on the side of the case. Pricing is not set, however, it will be in the $1500 price range.

Both wireless charging cases are capable of wirelessly charging your phone. They do not have internal batteries, but the 12 Light Kit can charge the lights using a D-Tap input, in addition to the standard OSHA IEC cable that powers it.